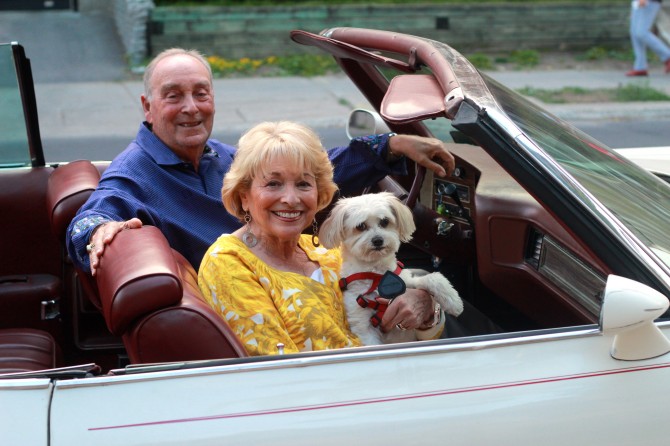 “We’re married 52 years so we met 53 1/2 years ago. We were set up. It was Yom Kippur and my mother made me come to shul and stay in shul — as a teenager, you go outside and come back in and so on. This year, I stayed through the whole service. Going out, I saw a friend that I hadn’t seen since high school. She asked if I had a boyfriend, and I said, ‘no, as a matter of fact, I just broke up with my previous boyfriend,’ and she said, ‘give me your phone number!’ So I did, and two days later she called, saying ‘my husband has a very dear friend, would you like to meet him?’ I said, ‘sure.’ The man they set me up with became my husband! We met… and that was it! I call it beshert. If I hadn’t listened to my mother and stayed in synagogue for the entire service, I wouldn’t have walked out at the same time as my friend and I may not have met my husband. I believe in beshert in life — to be at the right place at the right time.”

“On the first date, I asked her, ‘do you like dogs?’ If she had said she didn’t like dogs… that would’ve been it! We’ve always had dogs in our life!”