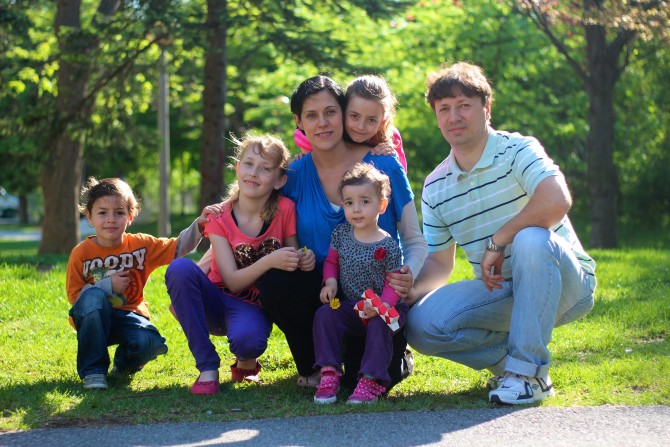 “When we were expecting our third child and we announced it to our family, we were surprised by their very bad reaction. They actually said that we are not planning our lives; that we’re a couple of fools. They said that, because they grew up in the communist system where people weren’t allowed to do many things, such as have lots of kids, because there was literally not enough space for a child in the government-issued homes. They just took all of those fears and problems from their childhood, and put them on us, even though it’s completely untrue. Their biggest concern was that we’re just multiplying the poverty, despite the fact that my husband and I each have a Bachelor’s degree, we know how to use computers, we speak three languages, we lived in Israel at the time, we work full time and have a good salary.

In the Torah, in the prayers in King David, there’s a saying about how it’s good and pleasant to sit with brothers together. It says good and pleasant because there are few things in this world that are good and pleasant at the same time. When I realized the meaning of this sentence, I understood that a big family with a lot of kids is one of those rare things. And I shouldn’t feel guilty; I shouldn’t have to explain to them because I’m so sure about it. If you’re sure about something, you don’t need to prove it. You shouldn’t feel guilty for the thing that makes you happy and makes you feel good. When all of my kids gather together, huddled up under my arms, and we read something or watch something, it’s a truly precious moment. I think to myself, ‘my goodness, I am a mother.’”