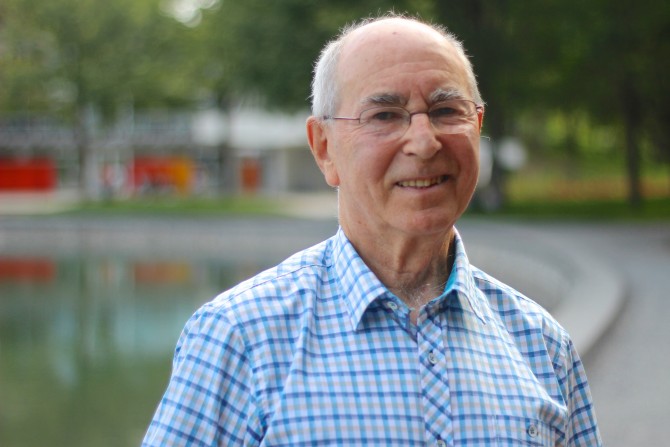 “Last December, on my way to Florida, I received an email telling me about a fundraising ride from Auschwitz to Krakow in June this year and it hit me that it’s actually the same route that I did when I was a ten-year-old boy. I said to myself, ‘this would be a nice way to celebrate my 70th year of liberation from Auschwitz.’ Auschwitz is a place of death and Krakow is a place of life and excitement. During the event, I was sent out to be the first person to lead the group of 85 bikers, with my son and granddaughter behind me.

I was born in Krakow and my whole family lived there. I walked from Auschwitz to Krakow in the winter of 1945. I was in a group of kids my age walking in the snow, hungry, cold, looking for food and a warm place to spend the night. Very quickly, we dispersed. I knew exactly where to go to see if anyone in my family had survived: my apartment where we lived before the war. I knew my mother and father were on the first march from Auschwitz, maybe one week before I was liberated. I knew that they didn’t survive. The people in my apartment sent me to this Jewish committee in Krakow and they took me to an orphanage.

Many things happened over the span of 70 years. I’m sure I’m not the same person as I would be had I not gone through the Holocaust. The Holocaust must have left some mark on me. I stayed in Poland for most of my youth. I studied, I obtained my degree, I became an electrical engineer, I married… everything fell into place. But I’m sure there’s some kind of scar left on me. The fact that I was able to achieve everything that I did achieve is a miracle. Everybody wonders, ‘what happens to the people who survive?’ But we should also wonder what could have happened to people who didn’t survive? What kind of impact would the six million people have made on society? It’s lost and will never be recovered.”