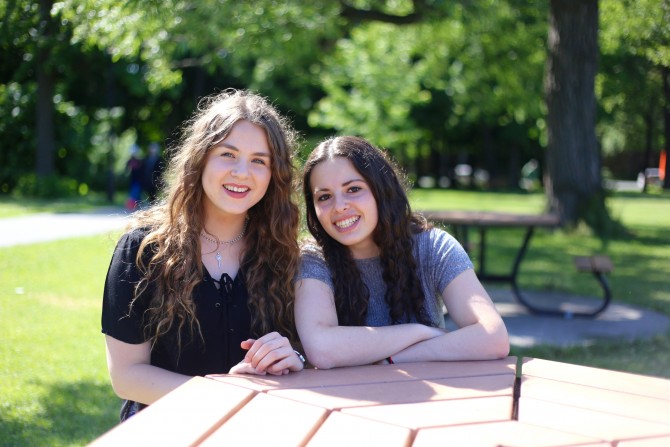 “I hosted an Israeli teen last year for a week, and I liked the experience so much that when she left, I asked my parents if there’s a way we could do this experience again. It was very cool to connect with someone from another country, but hosting someone from Israel is a bit different because we have a rooted connection. This time, I had the opportunity to host Avital for five months, so we became very close.”

“I’ve been in Montreal twice before because of the partnership between Montreal and Beer Sheva. In Israel, you go into the army when you’re 18, but there’s an option that you can defer your army service for one year to volunteer. This year, there’s a hundred “shinshinim”, as we’re called, all over the U.S., Canada, Europe, and South Africa. You volunteer in the local Jewish community, schools, and synagogues to strengthen the bonds between the Jewish community and Israel. It’s a partnership between the Jewish Agency, Federation CJA, and the Jewish Community Foundation.

It’s important for Israelis to have bonds with Jews in the diaspora because Israel is their country just like it’s my country. It doesn’t matter where you live—you have a connection because you’re Jewish. I feel really at home here even though I was only speaking English and I was far from home, my friends, and family; the Jewish community in Montreal became my family.”