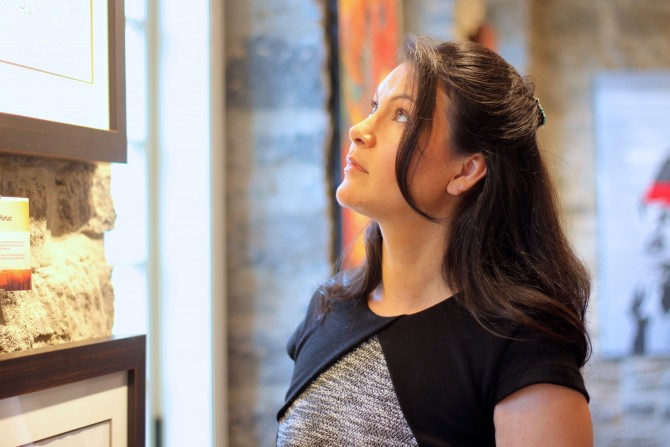 “After the Residential Schools shut down, everybody thought there was still an “Indian problem.” The province had the right to go into the communities and look over what was going on in terms of childcare and whether or not they deemed it fit. They called it the 60’s scoop—you turn around and your child’s gone and you never see them again. I’m Cree from Manitoba. My parents thought they were doing a good thing by adopting me because they were helping a poor little child. They were going to send me to Hebrew school and give me a new name… but they didn’t have the sensitivity to bring me up in a way that embraced my culture. Growing up, it was difficult for me, because I wanted to be what my parents wanted me to be, but I never really fit into that world. I grew up going to Hebrew school and going to synagogue Saturday mornings and having Jewish friends. I really love the culture; I think it’s beautiful, but I never fit in. I tried and tried and tried, but it didn’t work.

It got to a point where I was like, ‘I’m not going to try anymore.’ I ended up leaving home when I was 18. My Bubby, who was the biggest influence in my life and gave me unconditional love, was very worried about me and she actually paid for my plane ticket to go back to my community to meet my real family. I choose to be in the Native community, but I tell everyone that I’m a Jewish Indian, because that’s who I am. I feel like I created myself. I went in my own direction. The name that I use means “the sun” in Micmac. The cultural elder on a film that I worked on was Micmac, and he decided to give it to me as my spirit name. It’s supposed to be my strength and my being, so it means I am strong and bright like the sun. My Bubby always told me that I would do great things, and I never believed her. All the work that I do now is because of what happened to me. The Montreal Council of Women voted me Woman of the Year this year, and I thank my Bubby, because she was the one who always believed in me, even though I never saw it in myself. Even though my upbringing was really hard, it made me who I am today. All the work that I do now is because of what happened to me.”