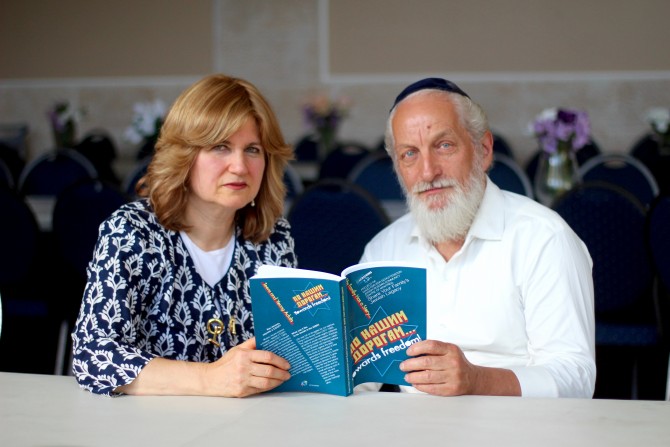 “My father was a religious Jew before the war and when the Communist Regime came in, all the yeshivas closed. So they would just get together in the house and learn Torah, but the whole group was arrested and sent to a labour camp without trial. My father’s wife was pregnant, but he never saw the baby because he was in jail and his wife and his child were killed in the Holocaust, as well as every single person in his family except one sister who managed to escape to Montreal.

After my father came out from the labour camp, he married my mother and my brother was born. He was arrested again and was exiled to Siberia, where I was born. Stalin died and they were pardoned. We went to another city, where I grew up, and my aunt found us and wanted to bring us to Montreal. We tried twice, but were denied. We were living as refugees; it was a very difficult time. My aunt applied for us to be sponsored immigrants in Canada, but Russia, again, denied the exit visa.

At that time, in 1972, the Russian Prime Minister, Kosygin, came to Canada for a personal visit with Prime Minister Trudeau. My aunt managed to get to Trudeau and he knew about us. So when Kosygin came back, the person who refused our visa called my father and said, ‘in 50 years of my career, nobody ever overruled my decision. But now it came from Moscow, from the Prime Minister, that you can go.’”

“I witnessed how my parents sacrificed to keep Jewish life in Russia, for themselves and by helping other Jews to keep their traditions. They kept their shul—illegal. They baked the matzo for Passover—illegal. Everything they did to remain Jewish was underground. They risked their lives. I asked myself, ‘why should I be any different?’ I have to follow their way of life. One of the reasons why I am religious is out of respect for my parents.”