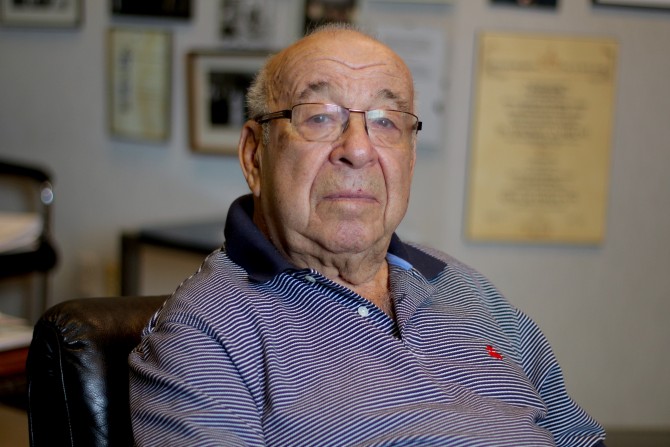 “I originally come from Czechoslovakia. On March 15th, 1939, the Germans came in and life completely changed. We were made 5th class citizens. My mother, my sister, and I fled to Hungary on September 15th, 1939—my father had fled earlier, to Paris. We went to Budapest and from Budapest we joined my father in Paris. I was put in school there and I learned French, and we stayed in Paris from December 1st, 1939 until June 13th, 1940, because one day later, the Germans came into Paris. And then we spent the next two months on the roads of France, using anything that moved, including our legs and horse-rolled carriages, to go as far away as possible from the advancing German armies. We ended up in Bayonne, where we tried to cross the border into Spain. However, the Spanish civil guard sent us back to France. We stayed in Nice from July 1940 until January 1941, when the famous Portuguese Consul General in Bordeaux granted us a Portuguese transit visa, on the strength of which we received a Spanish transit visa and we were able to leave France legally via Spain to Portugal, where we spent ten months waiting for a visa to go someplace away from Europe. I went to French school in Portugal, and then we took a very famous refugee ship called the Serpa Pinto.

We had no money, so the Combined Jewish Appeal of that day—known as the American Joint Distribution Committee—paid for our trip to New York. The Canadian government granted us a visa on the condition that we left after the war was over. It took us six weeks to cross the Atlantic. It was to our great surprise when we arrived that the Americans invalidated our transit visas to the United States, because they were issued before Pearl Harbour. They locked us up for ten days in Ellis Island, together with members of the American Nazi Bund whom the FBI had arrested. So here were refugees from the Nazis together with the Nazis!

We were let go in about ten days, and took the train from New York to Montreal, where we arrived on December 31st, 1941. And on January 10th, I started Montreal High School. When we arrived here, I was 12. We didn’t have money, we didn’t speak English, and we didn’t know anybody. We came to Montreal instead of Toronto, because we thought that since we knew French, we could somehow acclimatize ourselves here more easily. However, little did I know, that the Jews had to go through the Protestant school system, which was only in English. So I told Mr. Bourassa, whom I met later on in life: ‘you made an Anglophone out of me.’

I subsequently became the Chairman of Combined Jewish Appeal in Montreal, the President of the United Israel Appeal in Canada, and Canada’s representative on the Board of the Jewish Agency for Israel. After all that I went through as a child, giving back has been an important part of my life’s work.”