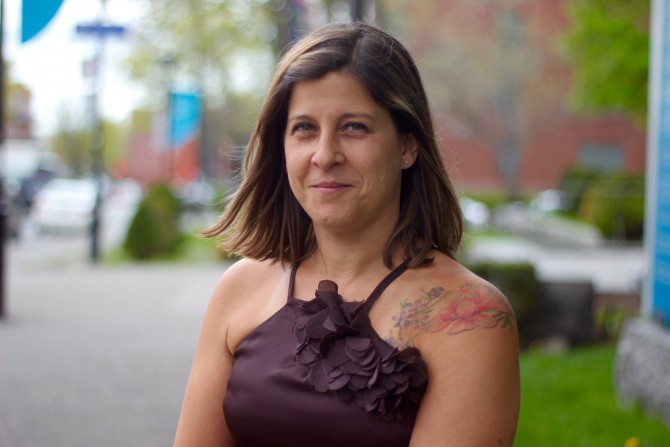 ““I was diagnosed with the BRCA mutation, which is a hereditary risk of developing breast and ovarian cancer. I had an 87% chance of developing breast cancer in my life and a 40% chance of developing ovarian cancer. A lot of the women on my father’s side of the family had lost their battles. The only real way to decrease your chance at getting these cancers is by removing healthy body parts. Within six weeks of finding out about this mutation, I chose to have a prophylactic, which is a risk-reducing hysterectomy. Then two months after that, I chose to have my healthy breasts removed and reconstructed with implants at a later date.

After I had a mastectomy with reconstruction, I decided to tattoo my scars on my left side to define my reconstructed breasts the way I wanted to. After I had the tattoo done, I posted it on Facebook to show women—and men, for that matter—that you can define beauty on your own terms. When I woke up the next morning, it had been shared all over the place. Strangers had shared it on their Facebook pages; I got a phone call from the New York Daily News, Global Television, Buzzfeed, CTV, all the radio stations asking me to talk about why I chose to do that. Now I joke that my boob broke the Internet!

Because my story was met with a lot of positivity and I realized that sharing it was doing a service to so many women, my confidence developed. Especially as women—skinny, fat, short, tall—we all have our insecurities. It doesn’t matter that I had no breasts and now have implants. You have to own yourself. We are who we are. So I can either spend time hating it, or spend time owning it. When you feel good about yourself, you carry yourself differently and feel more empowered, and that brings an outer beauty that you didn’t always have. After a mastectomy, regardless of whether they reconstruct or not, women often feel very scarred and ugly and damaged. So if you can look down and see something beautiful, it changes the way you see your body. I chose to tattoo one side because I like seeing scars on one side and beauty on the other—it’s sort of like the beginning and the end of my story.””